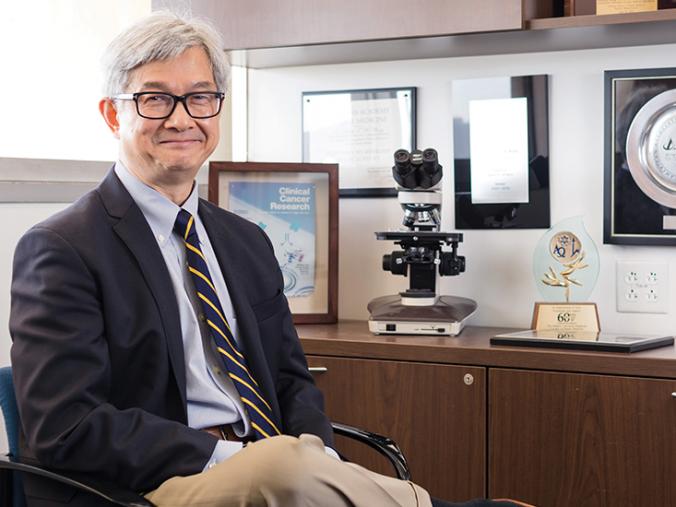 With lung cancer being a leading cause of cancer deaths among men and women, the need for better detection methods is urgent. Current clinical practice for diagnosing lung cancer involves invasive bronchoscopies, which aren’t entirely accurate, could have sampling errors, and may not be feasible depending on the health and age of the patient.

An emerging new medical technology, which researchers and clinicians are utilizing, is liquid biopsy for non-invasive detection of human cancer mutations. Liquid biopsy involves the sampling of a patient’s blood or urine using next generation sequencing or digital droplet PCR genotyping to detect whether there are actionable cancer mutations in the patient’s tumor. So far, this has been the best option oncologists have, outside of invasive biopsies, to detect cancer tumors earlier on in a patient’s disease. The problem with this method is that it’s about 80 percent accurate and is still in its infancy in cancer detection.

An unsuspected form of liquid biopsy that has gained momentum over the past three years is salivary diagnostics. For Dr. David Wong, associate dean for research, and a pioneer in the burgeoning saliva testing field, discussing spit is always at the tip of his tongue. Dr. Wong has dedicated nearly a decade of his career to saliva and the hidden gems of biological information that lie within its DNA.

In 2014, Dr. Wong’s research hit a major milestone and again in 2017, with landmark funding from the National Cancer Institute. In November of 2014, Dr. Wong and his team were able to use their novel new technology, called electric field-induced release and measurement (EFIRM), to detect and measure epidermal growth factor receptor gene mutations, a significant indicator of lung cancer. In their study using the EFIRM technology, they were able to achieve nearly identical results to the bronchoscopy-based detection of the same cancer mutations.

“We were able to show that salivary diagnostics is just as reliable in lung cancer detection as traditional methods are,” said Dr. Wong. “However, our method is non-invasive, nets quicker results (minutes versus days), and with the EFIRM-assay, the concordance is near perfect when compared with other biopsy-based genotyping.”

In March of 2017, Dr. Wong’s research and achievements gained the attention of the National Cancer Institute (NCI), who awarded him a $2.5 million grant and the opportunity to take his EFIRM technology to the next level. The funding supports a two-phased study that spans five years, with the goal to clinically refine and validate his technology.

“The National Cancer Institute sees great potential in our technology,” said Dr. Wong. “Their grant allows us to partner with the UCLA Department of Pathology and Lab Medicine and, if successful, UCLA will be the only location in the country to offer this type of certified diagnostic testing of a patient’s saliva.”

Dr. Wong never thought he’d be analyzing spit when he pursued a dental degree, but now he can’t picture doing anything else.