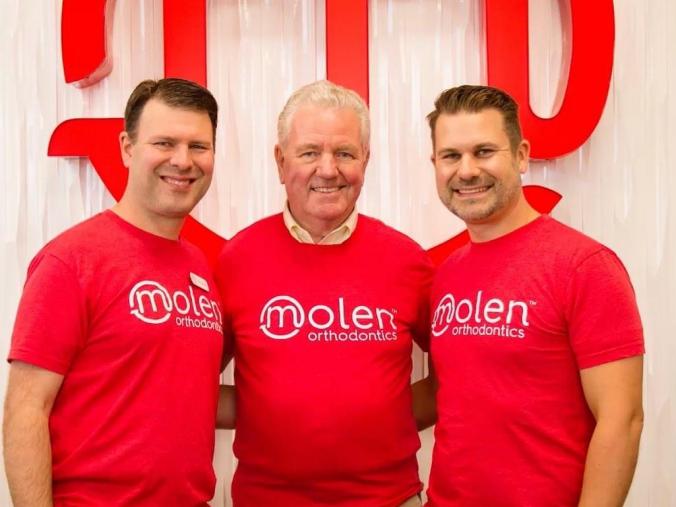 Molen Orthodontics is celebrating the 50th anniversary of its founding in 1972 by Dr. Bruce Molen, center, with his sons, Drs. Rick and Aaron
March 16, 2022

Dr. Bruce Molen, Class of 1968, was born in Great Falls, Montana, and grew up in North Hollywood, California. He was selected from among hundreds of applicants to become part of UCLA’s first dental class of 27 students. Following his dental education, Dr. Molen served as a captain in the dental branch of the U.S. Air Force. During his service he treated servicemen and servicewomen at Ellsworth Air Force Base in South Dakota for two years. It was during that time that he made the decision to continue his education and specialize in orthodontics.

Outside of orthodontics, Dr. Molen makes family his top priority and feels that they are his greatest accomplishment in life. He enjoys camping, carpentry and traveling in his camper van—the interior of which he designed and built himself.

Even more exciting, Molen Orthodontics is celebrating the 50th anniversary of its founding in 1972. UCLA Dentistry recently caught up with Dr. Molen who shared with us some of his favorite memories while at UCLA:

Q: Why did you choose dentistry & what do you most enjoy about being a dentist?

A: I chose dentistry because our family dentist became a friend of the family.  We actually enjoyed going to the dentist. I say 'we' because three out of four boys in the family became dentists. He really enjoyed dentistry, and he was a great influence on our decision to follow in his footsteps.

Q: Your practice, Molen Orthodontics, is celebrating its 50th Milestone Anniversary this year. What is one of your proudest moments as you reflect back?

A: The proudest moment in my fifty-year career is when three of my four boys also chose to become dentists. Rick and Aaron received their dental degrees from Loma Linda Dental School and continued their education at UCLA where they received their advanced degrees in orthodontics. They eventually joined my practice and became owners. David graduated from the University of Washington Dental School, and continued his education at the Mayo Clinic earning his MD degree and specializing as a maxillofacial surgeon.

Q: What do you do when you aren’t practicing dentistry?

A: I love to travel with my wife and have visited more than 70 different countries. I also enjoy woodworking, using the skills I learned as a carpenter when I worked at the motion picture studios during summer breaks while in dental school.

Q: If you could share one piece of advice to current dental students, what would it be?

A: Strive to be the very best you can be. Never stop learning, go to ADA conventions, and take continuing education courses. Above all, be honest in everything you do. Do public service and provide dental care to those less fortunate that otherwise could not afford it.

Q: Being a member of the first graduating class, what is one of your fondest memories while you trained at UCLA Dentistry?

A: Those of us in the first class were fortunate to have a high instructor-to-student ratio. We received lots of one-on-one instruction. The staff treated us with respect and never treated us in a derogatory way. When we arrived for our first day at the School of Dentistry there was no school. The environment at the school was fun as well as hard work, and the students became friends and enjoyed each other. We used to have faculty vs. student baseball games. We all looked forward to the day in the third year when we would move into the new facility and begin seeing patients. Finally, the operative dentistry skills that I learned at UCLA have been useful to me in my practice of orthodontics. I have used those skills to rebuild mutilated dentitions using temporary materials. After correcting their bite, I can then send these patients back to the referring dentists with a dentition that they can easily restore.