Keeping Her Eyes on the Goal, Despite the Obstacles 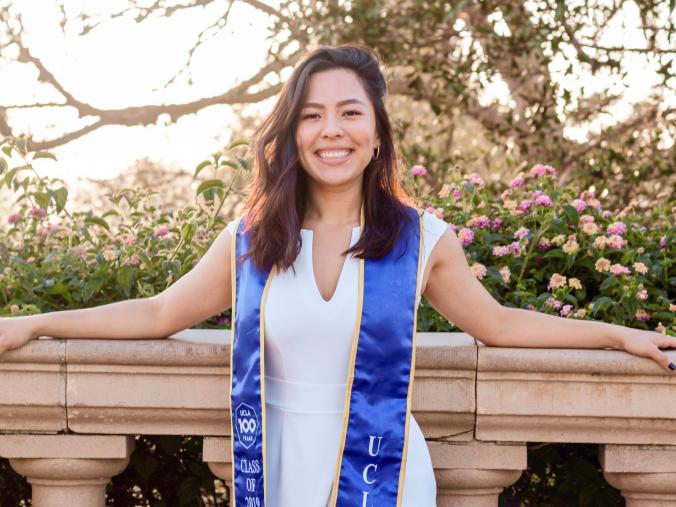 In honor of International Women’s Day 2022, the UCLA International Institute published a series of profiles of outstanding female Bruin students who will become tomorrow's leaders.

Growing up in Huntington Park, California within five miles of the Exide battery factory, UCLA dentistry student Livier Alexandra Mora observed many things in her day-to-day life that struck her as strange.

“I remember vividly that there were instances when the police set up checkpoints in the neighborhood to see if drivers had a license and insurance. When that happened, people would call my mom’s brother, who had a residency permit and a license, to ask him to drive them places in their cars. I knew that something wasn’t right, but as a child, I just didn’t understand,” she said.

It wasn’t until she was in middle school that Mora realized she was undocumented. Already a star student, she was unable to participate in a federally funded program that prepared students for college.

But Mora’s family remained positive. “My parents had this amazing way of handling these things and just said, ‘It’s OK. We’ll figure it out,’” she said.

Born in Guadalajara, Mexico, Mora had followed her parents to Los Angeles when she was seven. Although she initially struggled to learn English, she ended up skipping fourth grade because she was so far ahead of her peers in math and science.

“I got good grades in middle school and high school, but later realized that there wasn't much funding support if I wanted to go to UC or Cal State,” she said.

When she completed high school, Mora received a scholarship for two years of community college tuition. She began her studies at Cerritos College in 2009, but her undocumented status led to logistical and psychological challenges, and eventually she dropped out.

“I thought, ‘What's the point of taking these classes? Even if I eventually transfer to a four-year university; I'm not going to be able to work legally with whatever degree I get.’”

Just as she was considering going to Mexico to attend university, Mora’s partner encouraged her to stay and pursue her education in the U.S. She gained legal status in the U.S. after they married and when she became pregnant, “I went back and enrolled full time again and didn't stop until I graduated from UCLA.”

She re-started her studies at Cerritos College in 2014 and was soon balancing school and motherhood, which helped her develop excellent studying and time management skills.

The young mother completed an A.A. in biology, chemistry and natural sciences in 2016. Her excellent grades earned her a highly competitive, three-year Jack Kent Cook Undergraduate Transfer Scholarship to complete a B.S. in neuroscience at UCLA.

“When I transferred to UCLA, I was ecstatic,” she said. “The joy from my academic achievements, however, was dampened by turmoil in my personal life.” A divorce and adapting to co-parenting challenged her ability to cope.

When she finally opened up to Professor William Grisham, one of her neuroanatomy instructors (“one of the hardest classes I have ever had!”), she learned about the support services available on campus and sought help. Her grades soon improved dramatically.

“If I had to say one person made a difference for me in continuing my education, it was Professor Grisham. Recently I reached out to him and let him know that I’m happy in dental school. I think it’s important to share not just your struggles, but your successes with the people who helped you.

“It took a lot of work to get myself back together, but it was necessary work because I had a child. I am so grateful for my daughter Audrey. She’s been my biggest cheerleader,” said the aspiring dentist.

Mora’s undergraduate studies at UCLA coincided with a time of sharp anti-immigrant rhetoric on the part of the U.S. president and administration. “It’s hard to describe how much the whole Trump era and its aftermath affected my family,” she commented.

“It was a lot to unpack just to say that I was undocumented in the past and now I’m documented. I’d think, ‘Oh, should I say that?’ It’s part of my family’s story, yet you started to feel you should not mention it so you wouldn’t be targeted.

“It was a difficult period; I remember students celebrating Trump’s impending win at an election watch party on campus in 2016 and thinking, ‘There are people who are championing this person who is literally saying that people like myself aren’t worthy.’”

Choosing to become a dentist

Both before and after she became a Bruin, Mora took advantage of campus programs designed to help low-income and Latino community college students aim for professional careers in health, including the Medicos, Enfermeros y Dentistas Para El Peublo (MEDPEP) program of UCLA Health and the Basic Dental Principles (BDP) program of the UCLA School of Dentistry.

“Even though the students in the MEDPEP program all knew they were interested in a healthcare career, we didn’t know how to get there,” said Mora. “That program gave you the map. It showed you the main things that you need to do for any school to consider you.”

Prompted by a mentor to consider dentistry, Mora enrolled in the year-long extracurricular BDP program, which offers undergrads lectures on dentistry plus a lab course, in 2019. “I loved it. It was literally a merger of three things that interested me: healthcare, using my hands and immense potential for career growth — because you can specialize or you can go into teaching,” she explained.

After completing her B.S., she took a year off to work, enjoy her daughter and save money for the standardized tests and applications needed for dental school. She even took the pandemic in stride because her job as a neuroscience research assistant at USC allowed her to work at home, enabling her to spend significant time with her daughter.

She is now in her first year of dental school at UCLA, courtesy of a second substantial Jack Kent Cooke Scholarship, this one for graduate school.

“The financial support is amazing — it’s decreased the amount of my loans for dental school almost by half. But being a Jack Kent Cooke Scholar is way beyond just financial support,” explained Mora. The Jack Kent Cooke Foundation, its current scholars and alumni comprise a powerful network that provides crucial support to its student scholars and alumni, assistance in identifying schools and applying, as well as peer support and life skills training.

Reflecting on her current path, Mora said, “My family has been my biggest support system; they’re happy that I get to live this dream. It’s really a whole village. I am so proud that I have their support, so I tell myself, I need to carry my weight as well.”

Given that her neighbors are ready to become her first patients, there is no doubt she will do just that.