Embracing diversity – one dental student at a time 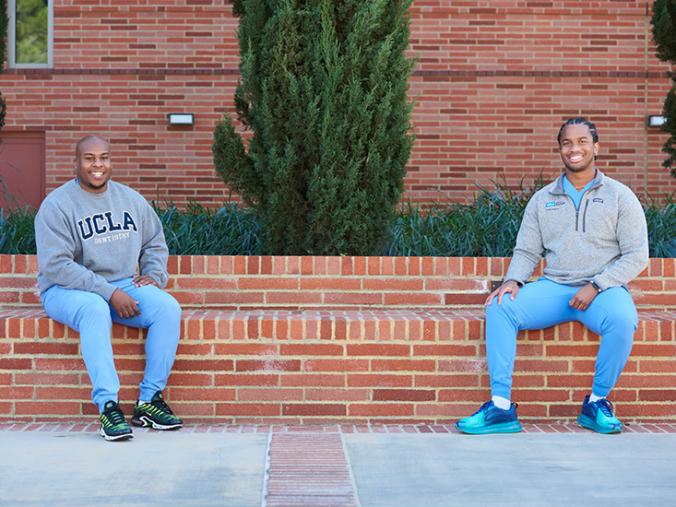 For UCLA dental students, Isaiah “Izzy” Sampson and Ryan Davis, entering the dental field was in one word — perplexing.

Growing up in several different states, Sampson never saw a Black person in his family’s dentist’s office. Not the dentist, the hygienists or even the office staff. As he started thinking about applying to dental schools and attending pre-dental society meetings, he again found himself among the only people of color, let alone Black people.

Even faced with that lack of diversity, Sampson still decided to apply to dental schools. He felt it was his calling to become a dentist and to also help do his part to make sure that the next generation of Black children would see a dentist who looked more like them.

At UCLA, Sampson and Davis are in the minority in their class of 88 students — six students are Black in the class of 2023. Most recently, a recruitment push to attract more students of color has started to pay off. The demographic make-up of the incoming class of 2025 is 11% Black, which was a goal the school had set for the class of 2026 and has met a year ahead of schedule. In comparison, Black people make up 8% of the population of Los Angeles County.

The school has also made strides in attracting more Hispanic students, right now, there are 18 Hispanic dental students, or 20%, in Sampson and Davis’ class. This dips a little to 14% of the incoming class of 2025. The overall goal is to have the incoming dental class represent the diversity of people that make-up the greater Los Angeles community.

“As we proclaim a strong commitment to diversity in our student body and the dental workforce, we must welcome the accountability that it demands,” said Dr. Edmond Hewlett, a professor of restorative dentistry and the school’s associate dean for equity, diversity and inclusion.

The UCLA School of Dentistry is not alone in the challenge of attracting more underrepresented minorities to enroll. According to a recent study by the American Dental Education Association, the percentage of Black people in dental school has increased slightly from 5.3% in 2010 to 5.8% in 2019 and enrollment of Hispanics/Latinos have gone from 7.7% in 2010 to 10% in 2019.

How representation can make a difference

Following the murder of George Floyd — yet another unarmed Black man killed by a police officer in the United States — the school’s lack of diversity forced a much-needed and tough conversation about systemic racism and social injustices. The dental school held a virtual talking circle bringing together more than 200 people from the dental school community, which lasted seven hours. The emotional conversation included Black students sharing experiences of racism and what it means to be Black in today’s society.

Talking was helpful but then the school had to confront the biggest hurdle: how to turn these conversations into action that would result in more resources and energy going toward improving the school’s ability to recruit a more diverse student body.

Among the initial steps, the school formed its committee for the advancement of racial equity, or CARE, made up of students, faculty and staff, to improve diversity and ensure that equity and inclusivity is happening at every level of the dental school from faculty recruitment down to curriculum.

“We cannot in good conscience recruit students of color to our school without doing everything we can to provide for them an environment in which they can thrive,” Hewlett said. “Only by striving to make it so can our school become the best version of itself.”

As a student in the dental school, Davis agreed.

“As a school, I believe we’ve done a good job at handling the snowball effect of the current social climate,” Davis said. “We are on the right track and I am optimistic that we will accomplish the goals that have been set to increase awareness, accountability and respect.”

CARE’s student liaison, Selena Gray, who is part of the 2023 graduating class, has harnessed the power of change led by a group of individuals with a common goal. One of several initiatives that has moved forward is a pipeline program with Morehouse College, a historically Black college and university. The program encourages students who demonstrate academic achievement, dedication to the field of dentistry and exhibit a commitment to leadership and/or community service to consider a career in the dental field.

“We are working on creating a pipeline program for students attending historically Black colleges and universities because the students from these institutions are brilliant and qualified, yet underestimated,” Gray said. “We want to create a bridge for students to feel supported at the UCLA School of Dentistry educationally, financially and mentally.”

Students are helping lead the reform

Another step student leaders took toward bringing the dental school’s community together was establishing UCLA SIDE (students for inclusion, diversity and equity), which is working to address topics of racial, ethnic and cultural disparities in health care. For the past year in the pandemic-forced virtual environment, the student-run organization has set-up a series of online lectures and film screenings touching on cultural diversity and underrepresented minorities.

Other initiatives include curriculum changes to be more relevant and relatable to all students in the dental school. The school is also offering seminars on cross-cultural sensitivity, racism and implicit bias. Another big push is to recruit more faculty from underrepresented minorities.

A big part of the puzzle to piecing together a more diverse student body, and in-turn a more diverse profession, is making sure people interested in becoming dentists can become competitive dental school applicants. Undergraduate students need to view dental school as a viable and realistic option, said Davis. The desire may be clear, but the path may be foggy.

Growing up, dentistry had always intrigued Sampson for a few reasons. He saw his mother’s quality of life deteriorate due to oral health problems and he has made it his goal to help those in similar situations. The other motivator is that the field is the perfect overlap of his love for science and art.

For Davis, a former UCLA Bruins football player who graduated in 2016, he realized that football had an expiration date and that he needed to find a direction. A series of chance meetings with practicing dentists pushed him to seriously look at dentistry as a future path. He was attracted to the autonomy of the work and more how he would be able to help people. He also saw that the field needed more diversity.

“The allure of the profession took me by storm,” Davis said. “I came in contact with a network of Black dentists who embraced me. Dentistry found me.”

Both Sampson and Davis said that even starting the dental school application process was daunting.

“Questions such as: How many schools do I apply to? What will the interviews be like? And how much shadowing experience do I need? came up,” Sampson said. “Add to this with the fact that I didn’t have much of an opportunity to volunteer at a dentist’s office, because I needed a paying job in college.”

Davis said he had a similar experience, but he was fortunate enough to cross paths with Hewlett, who in addition to being the school’s associate dean for equity, diversity and inclusion is also a UCLA Dentistry alumnus. Hewlett encouraged Davis to apply to UCLA Dentistry’s post-baccalaureate program.

The program provides extensive resources to help increase an individual’s competitiveness as a dental school applicant. In 2017, Davis was one of only four students to be included in that year’s cohort. Since the program’s inception in 2003, 92% of those who completed the program and applied to dental school were accepted, and 65% of these students enrolled at UCLA.

As they finish up the first half of their four years of dental training, both Davis and Sampson agree that UCLA has welcomed them and that there is a strong support system in place.

“It was intimidating at first to be one of a handful of Black students,” Sampson said. “But, I’ve been able to connect with other students of color along with support from Dr. Hewlett and our student services office, we’ve been able to deal with the good, bad and ugly. And I’m happy to say that coming here was the right decision.”

Both students have also started to help with recruitment of students of color and have visited high schools, part of the UCLA High AIMS program, and undergraduate pre-dental societies at UCLA, to answer questions and encourage anyone who has an interest in dentistry to apply to dental school.

“When undergraduate students of color see professional students who look like them, that visual representation shows these individuals that a health care profession is absolutely realistic,” Davis said. “We don’t want to be seen as this exception to the rule. This is what this school is about and it’s not just talk.”

In the first year of my deanship, I found myself surrounded by faculty, students, staff, and fellow academic leaders wanting to introduce me to the beauty of this campus, this city, and this outstanding dental school – UCLA Dentistry. I have been warmly welcomed by the entire community to what has now become my home.