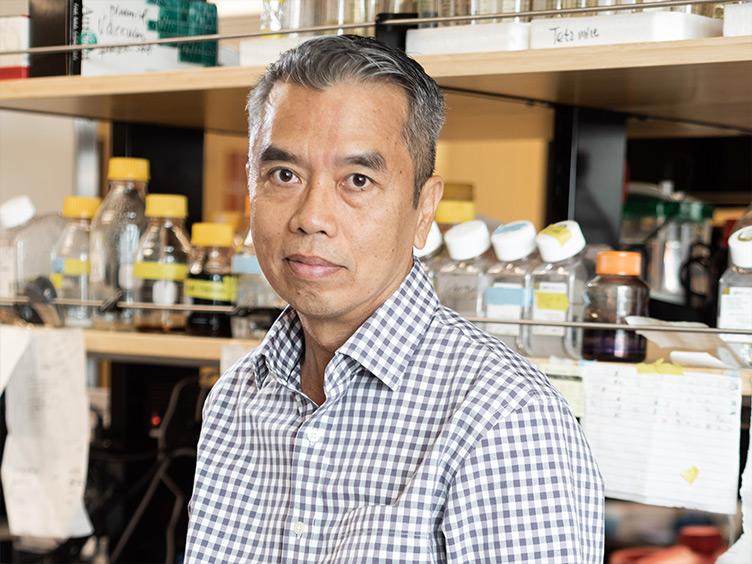 Hung Ton-That received a B.S. degree in Chemistry in 1996 and a Ph.D. degree in Microbiology in 2000 from UCLA. His graduate work aimed to elucidate the mechanism of sortase-catalyzed cell wall anchoring of surface proteins in Staphylococcus aureus. He moved to the University of Chicago for his postdoctoral studies investigating the mechanism of pilus assembly in Gram-positive bacteria. Between 2004 and 2018, he held faculty positions at the University of Connecticut Health Center and the University of Texas McGovern Medical School, continuing his studies of Gram-positive pili and their role in biofilm formation and bacterial pathogenesis. In July 2018, he joined the faculty of the Division of Oral and Systemic Health Sciences at the UCLA School of Dentistry. His research program currently focuses on the molecular assembly on the cell surface of Gram-positive pathogens, oxidative protein folding in these monoderms, and virulence mechanisms of the Gram-negative Fusobacterium nucleatum.

1. Virulence Determinants of Fusobacterium nucleatum
The Gram-negative pathogen F. nucleatum is a key colonizer in the development of oral biofilms and well known for its association with human diseases including oral infections, preterm birth, and colorectal cancer. F. nucleatum has an inherent ability to interact with many early and late colonizers of the oral biofilms. It induces inflammatory responses and preterm birth in rodent models of infection, as well as promoting colorectal carcinogenesis in vivo. Despite its pathogenic potential, we have limited knowledge about the mechanisms of fusobacterial virulence and associated factors. A major obstacle limiting progress is the lack of robust genetic tools and systematic investigations. We have begun to tackle this problem with multiple complementary approaches including forward and reverse genetics, cryo-electron tomography, biochemical methods, and rodent models of infection. We are currently characterizing novel factors and pathways resulted from these experimental approaches that affect bacterial virulence and fitness, promotion of colorectal cancer, and induction of autophagy.

2. Molecular assembly on the cell surface of Gram-positive bacteria​
​Gram-positive pathogens assemble on their surface covalently linked protein polymers known as pili or fimbriae that enable these bacteria to adhere to specific host tissues and initiate a pathogenic program. A typical pilus contains a major pilin forming the shaft and one or more minor pilin subunits. The heteromeric pilus is assembled by tandem transpeptidase enzymes called sortases. A pilus-specific sortase catalyzes the extension of pilus heteropolymers. The product of this cyclic polymerization is handed directly to the housekeeping sortase SrtA, which completes the assembly process by anchoring the resulting pilus polymer to the bacterial peptidoglycan. Several aspects of this biphasic mode of pilus assembly are not well understood. The current interests of the lab are to (1) examine the mechanism of pilus hijacking and polymicrobial interactions mediated by the major co-aggregation factor CafA in A. oris, (2) elucidate the mechanism of SrtA modulation of CafA spatial positioning and CafA-mediated coaggregation, and (3) examine the glycosylation mechanism of the cell wall anchored GspA that contributes to biofilm formation and membrane integrity. Furthermore, the commonality of these aspects is also being examined in Corynebacterium diphtheriae, Enterococcus faecalis, and Group B Streptococcus.