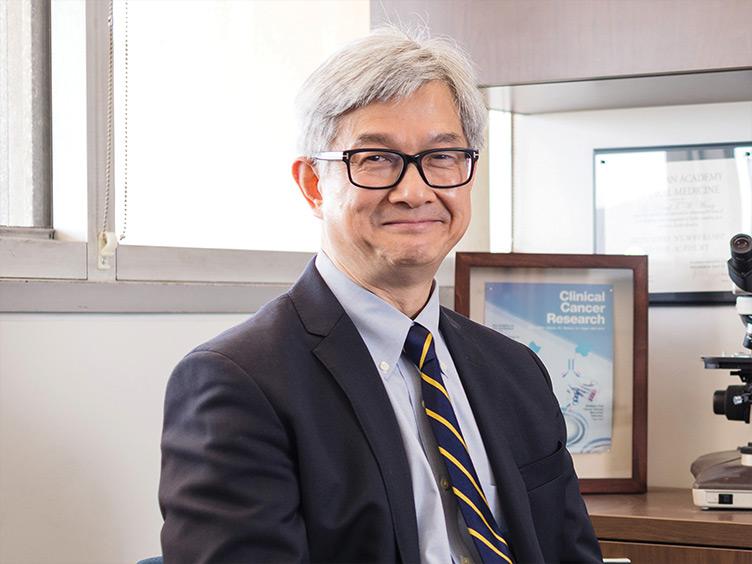 David T.W. Wong, D.M.D., D.M.Sc. is the Felix and Mildred Yip Endowed Chair in Dentistry and a Professor in the Section of Biosystems and Function in the Division of Oral and Systemic Health Sciences. He is the Director of the UCLA Center for Oral/Head and Neck Research. An active scientist in oral cancer and saliva diagnostics research. He has authored over 305 peer reviewed scientific publications. He is a fellow of the American Association for the Advancement of Sciences (AAAS), past member of the ADA Council of Scientific Affairs and the past president of American Association of Dental Research (AADR). Dr. Wong's Lab website (https://www.hspp.ucla.edu).

1. Discoveries:  My laboratory spearheads the use of genome-wide and proteome-wide high-throughput technologies to harness the diagnostic and biological determinants pertaining to the pathogenesis of oral/head and neck cancer. In particular we are focusing on the genomic and proteomic determinants of oral cancer progression. Using a patient-based genome/proteome-wide approach; we are harnessing the genomic and proteomic determinants that distinguish progressing from non-progression oral precancers. For genomic defects, a concurrent approach to identify gene copy number abnormalities (CNA) by cDNA microarray comparative genomic hybridization (CGH) as well as SNP-based loss of heterozygosity (LOH) using the Affymetrix 100K SNP-based Mapping Arrays. For expression analysis, the Affymetrix 133+ 2 and all exon high-density oligonucleotide arrays are used. For proteomic analysis, LC-MS/MS as well as single cell proteomics are creatively being integrated. A key component to a systems approach (Weighted-Gene Co-Expression Network Analysis, WGCNA) is to seek out molecular concordance of detectable molecular defects.

2. pathogenesis:  We subscribe to the belief that a central defect in human cancer lies in the dysregulation of cell cycle control. stablishing a molecular database of cell cycle regulatory genes dysregulated in head and neck cancer and understanding the molecular and biochemical pathways of these genes are areas of prime interest. Using differential expression screening assays we have identified a number of cellular genes that are differentially expressed in squamous cell carcinoma. CDK2-AP1 is a differentially expressed cellular gene that is currently being studied. CDK2-AP1 is a novel gene exhibiting growth suppressor properties. CDK2-AP1 exerts its growth suppressor function by negatively regulating the activities of DNA polymerase-a/primase and cyclin-dependent kinase 2 (CDK2). CDK2-AP1 associates with DNA polymerase-a/primase suppressing DNA replication, affecting predominantly the initiation step. CDK2-AP1 has been found to associates with the monomeric non-phosphorylated form of CDK2, suppressing CDK2-associated kinase activities and cell cycle progression. CDK2-AP1 also targets CDK2 for proteolysis. We are investigating the detailed biochemical and genetic mechanisms of CDK2-AP1 in cell cycle regulation, normal development and carcinogenesis. The most recent excitement of this research includes finding that CDK2-AP1 -nulled mice are embryonically lethal and that CDK2-AP1 is an epigenetic regulator for differentiation competency for mouse embryonic stem cells, placing this gene at a pivotal juncture of stem cell differentiation and development.

3. Molecular Diagnostics:  The early detection of cancer by non-invasive means has been the holy grail for cancer researchers. My research group has been spearheading a series of concerted efforts to spearhead the scientific and translational frontiers of salivary diagnostics. The use of saliva, a non-invasive biofluid, for oral and systemic disease detection, for disease progression, and for therapeutic monitoring are highly desirable goals. We have harnessed and defined five diagnostic alphabets from human saliva: salivary proteome, transcriptome, micro-RNA, metabolome and microbiome. The availability of these diagnostic alphabets greatly enhanced the translational utilities of saliva. In parallel to the biomarker efforts, point-of-care technologies are being developed for clinical applications. The “Oral Fluid NanoSensor Test (OFNASET)” is a prototype nanotechnology-based point-of-care sensor that will have the ability to detect multiplex analytes in saliva for disease detection. Two additional highly impactful outcomes emerged from these initiatives. One is the discovery of salivary extracellular RNA in saliva, including a previously unnoticed landscape of non-coding RNA. This project, funded by the NIH Common Fund on “Extracellular RNA Communication Consortium” opened a new horizon of saliva biology. A second facet of excitement is the finding that saliva is an optimal biofluid for liquid biopsy (saliva liquid biopsy, sLB) for detection of actionable mutations in human cancers. Using an electrochemical technology called electric field-induced release and measurement (EFIRM), circulating tumor DNA (ctDNA) was detectable in lung cancer patients with near perfect concordance with tissue-based biopsy genotyping. As liquid biopsy is an intensely researched focus, the development of EFIRM and the utilization of saliva as a non-invasive biofluid is timely and highly impactful.