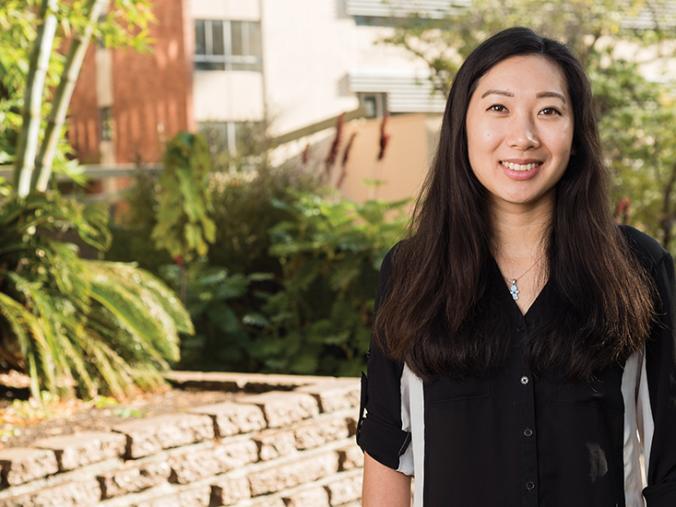 After she graduates in June, Diana will head to Harvard School of Dental Medicine where she’ll begin a four year training program as an Oral Pathology resident, followed by a D.M.Sc. program in Biological Sciences in Dental Medicine. You can see the excitement glowing from Diana’s face as she talks about oral pathology and what lies ahead. “I fell in love with pathology when it was introduced during my didactic courses. Histology was like a different language to me and I couldn’t get enough.”

Diana’s interest in dentistry began through a painful experience. After completing her undergraduate degree, she began a career as an applications engineer in the biotechnology field. She started having pain in her jaw and her dentist told her she had two impacted wisdom teeth that needed to be removed. The aftermath of the removal didn’t go as planned. After countless follow-up appointments and numerous complaints of a shooting pain in her jaw, her dentist finally decided that there were fragments of teeth still left in her mouth, causing a major infection.

“In a weird way, that experience of bad dental work ignited an interest in dentistry for me,” said Diana. “I felt like I could be a really good care provider by giving patients the respect that I felt I never received. I believe an important part of being in healthcare is listening to patients and educating them about what’s going on with their body.”

Despite her burgeoning career in biochemistry, Diana couldn’t ignore her draw to dentistry. She began volunteering at a dental office, and eight months later, she found herself applying to dental schools. In the fall of 2013, she entered UCLA Dentistry as one of the eldest female students in her class.

“Dental school was a very big lifestyle change for me. I was going from making a good salary with a lot of independence and traveling to being back in school taking difficult dental courses. But looking back at these years of dental school, I believe I made the best decision to change career paths.”

In the past four years, Diana has made connections that she hopes will remain intact after graduation, specifically, the valuable mentors she’s been introduced to. In her second year of dental school, she began researching in Dr. Anahid Jewett’s lab on the comorbidities associated with teeth bleaching, which she believes will ultimately lead to oral cancer.

“Research has always been an important aspect of my career, even when I was an applications engineer helping my clients. Research allows us to get to the root of the problem and figure out why something is the way it is and how we can better treat people.”

When she makes her new life on the east coast, Diana is going to miss the sunshine and her loved ones the most, but she has dreams to one day come back to UCLA and teach at the dental school. “I would love to head the first oral pathology postdoctoral program at UCLA,” said the Pasadena native. “It’s not the most popular specialty to go into, but an understanding of pathology transcends every stage of a patient’s treatment plan. For me, that was the biggest draw to the field, seeing something from beginning to end.”